Take a Knee, Take a Stand 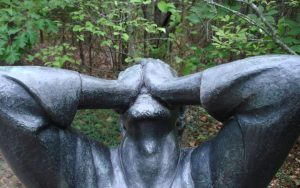 Last year an NFL player, self-identified as a devout Christian, decided to “take a knee” during the playing of the National Anthem. It was a silent protest on behalf of Black Lives Matter. He is bi-racial and was raised by white parents. I can only assume that matters of race are acutely and personally important to him. Currently NFL players across the country are taking a knee during the National Anthem – some for the same reason, others out of solidarity, and still others for any number of other reasons. I am quite certain that by now you are more than familiar with the issue and have perhaps formed an opinion. Of late those opinions are fierce and divisive. I have no desire to offer yet another voice to this debate by making my own point, clarifying a side, or otherwise adding another remark that will add yet more division. I have nothing to add…

Except to write and say there are times to take a knee and take a stand.

Taking a knee during the National Anthem has created an uproar that has a religious fervor to it. A belief system has been challenged and assaulted. There was a time when making a point against those in power would cost a life. Nero lit up the Appian Way with the crucified bodies of Christians and other “dissenters” that stood against the regime. In this current debate, if you do not stand it will cost you derisive ridicule, your reputation, and perhaps even employment.

Please do not read into this. I stand up for the National Anthem and salute the flag because, in part, I am grateful to live here, I am proud of those who put their life on the line to defend me (and our freedoms, including the freedom of speech), and because I feel a sense of responsibility as a citizen of this country. I have traveled to places hostile to my faith as well as hostile to my country. I am thankful for each return trip to see the flag and the nation for which it stands.

I will leave it to others to debate First Amendment Rights, respect of the flag, the freedom of expression and the cost of such freedoms. While I cannot pretend to be an informed fan of football, let alone the NFL, there are other debates going on that are also important, such as the physical, emotional and mental concerns of concussions; egregious violence on and off the playing field; and the idolatrous veneration of athletes, amateur as well as professional.

It is enough for me to write that as a follower of Jesus, and not football, there are times to take a knee. It is an act of submission to a greater power and a sign of humility. I am to take a knee to side with compassion and empathy for those marginalized and neglected. To follow Jesus calls on me to bend the knee in submission to my own will that I may be open to a greater will beyond my own. I am, I have discovered over and over again through the years, not always right. To bend the knee is to confess that I do not have all the answers.

There is also a time, as a follower of Jesus, to take a stand. The prophets of old continue to declare that all is not right in this world and so I am to stand up for justice on behalf of the down-trodden; I am to stand up for what is right against principalities that stand for what is decidedly wrong. Day by day I am called to stand up and follow Jesus, making a difference in love, by love and with love. Martin Luther famously stated, in the face of ecclesiastical powers that sought to silence him, “Here I stand, I can do no other, so help me God. Amen.” I strive for such strength of conviction, but I confess that too often I slouch when I should be standing.

Many, many years ago I answered a call that led me through the waters of baptism and into a trembling world. Therefore I am beckoned to take a knee and take a stand – not to a team, a mascot, or any other “way of life,” or culture, or the tyranny of popular opinion. I am to take a knee and take a stand, because my life is not my own and I am wondrously connected with all others, kneeling and standing. Martin Luther King, Jr. once stated, “All…are caught in an inescapable network of mutuality, tied in a single garment of destiny. Whatever affects one directly, affects all indirectly. I can never be what I ought to be until you are what you ought to be, and you can never be what you ought to be until I am what I ought to be…”

Long ago, Jesus took a knee at Gethsemane, seeking the will of God. Early the next morning he took a stand before Pilate, and in his death, he now most fully lives.

Dear God, help me to know when I ought to take a knee, bowing down in submission to your will and not my own. Forgive me when pride distorts my sight and I seek my own gain at the cost of others. Strengthen me to know when to take a stand, even when it is not popular, on behalf of those whose voices are not heard and whose lives are trampled under by the principalities of this world. And Lord, grant me grace that when others fail to take a knee when they ought to stand, or to stand when they ought to kneel, to see them through your eyes, the eyes of mercy and compassion, in Jesus name. Amen.