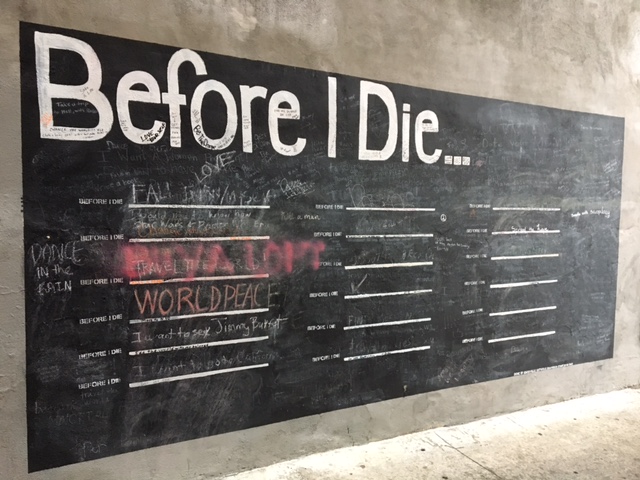 I was in between appointments in an old section of Knoxville and decided to take advantage of my thirty minutes of downtime by wandering around the city. Deep down I felt certain I would eventually stumble across a good coffee shop, bakery, or maybe both! Turning a corner I was initially disappointed to discover yet another scruffy alley, littered with the usual urban detritus. Along one of the walls of the alley, however, was a painting of sorts – a splash of graffiti from a reflective artist with a philosophic bent. In large letters three words were carefully painted: “Before I Die.” Beneath the caption, lines were drawn in neat rows and columns, encouraging pedestrians to pause long enough to ponder and fill in the blanks with their respective answers. One person wrote, “Date your mom.” Another scrawled, “Dance in the rain.” A beleaguered fan wrote, “Titans make the playoffs,” and a parent wished to “take my kids to the beach.” Jimmy Buffett’s name appeared several times, sometimes inappropriately. The one word I saw over and over again was “love.”

One of the few things that separate us from the rest of the animal kingdom is that we have a knowledge that we will die. Daniel Ogilvie, a psychology professor at Rutgers, was giving a TED Talk about death and the soul. He tells the story of his four year old daughter. Late at night she had been lying in bed thinking and bolted upright, jumped out of bed, and raced into his bedroom crying saying, “I don’t want to be a thing that dies!”

The thought of death, in spite of being surrounded in a culture of death, is terrifying for most us, and a topic usually avoided. Yet, knowing that one day our time will come can give us better focus on how we will live today. This is not about creating a “bucket list” or “seizing the day,” but recognizing that life is too precious and valuable to waste. Henry David Thoreau acknowledged as much when he wrote: “As if you can kill time without injuring eternity.”

The Psalmist writes: LORD, let me know my end, and what is the measure of my days; let me know how fleeting my life is (39:4); and teach us to count our days that we may gain a wise heart (90:12). We want to know such things because it intensifies how precious this life is. It grounds us in a sense of urgency – not frantic hopelessness.

When we understand, albeit haltingly, that life is fleeting, we can then die to those things that do not count or matter and will not live on. It opens us up, as with the baptism covenant in Paul’s letter to the Romans, to the life God has created for us to live in.

There is too much emphasis, I think, on eternal life as after life. Certainly in the teachings of Jesus it is clear he believed in life after death. But it is also clear that eternal life begins now. The problem with seeing eternal life as only about the afterlife is that it focuses our attention on the next world instead of transformation in this world. “I have come,” says the Teacher, “that you might have life, and have it in abundance.”

Before I die…Love. Let us then place love not on a list of things to be accomplished before we die, but in our living, day by day, moment by moment. Love is all that remains when our breath becomes air and God receives us back as eternity rolls on and on and on…